Send your inquiry of Aulonocara Blue Gold Cichlid (Aulonocara korneliae) to our email :

The Aulonocara Blue Gold Aulonocara korneliae is a relatively small sized Peacock cichlid, reaching only about 4 1/3 inches (11 cm) in length. This cichlid is a member of the Aulonocara genus, a very small group of fish from Lake Malawi, Africa known as the Peacock Cichlids. This genus contains only about 23 species, but has many subspecies, and they very popular with aquarists. The brilliant color patterns in blues, reds and yellows give this group the well deserved name of “Peacock cichlids”.

The fascination and appeal of this fish is its rich coloration. In its nominate form it has a gorgeous sparkling blue head and a body with black and blue vertical bars accented with beautifully fins of blue and gold. There is also a variety that has an orangish cast to the shoulder, which is called the Orange Shoulder Peacock or the Aulonocara Blue Gold Roberti. Some other common names this species is known by include Aulonocara Chizumulu, Korneliae Blue Gold, Aulonocara Korneliae Chizumulu, and Blue Gold Aulonocara.

The fish pictured above is the Aulonocara Blue Gold Roberti or Orange Shoulder Peacock variety, notably distinguished by the orange band behind its head and having more orange on its dorsal fin. It is described as a variety of Aulonocara Korneliae but some also describe it as a separate species Aulonocara Roberti. Being a variety of A. Korneliae (a validly described species) is probably the most likely however, as the other term A. Roberti infers a separate species. This other designation doesn’t hold up at present as the species is unconfirmed and describing it as such is suggested to be a trivial naming.

This species of peacock cichlid is very similar to the “Red Shoulder Peacock” also called the Aulonocara Fort Maguire Peacock Aulonocara hansbaenschi. These two are closely related and because the color patterning of Aulonocara hansbaensch can be extremely variable, these two can often look very much the same. This can create confusion when selecting them for the aquarium, so besides knowing the common names of these fish it helps to know the scientific names as well.

The Aulonocara, along with the Utaka Cichlids Copadichromis and other non-Mbuna’s, are members of the Haplochromis group. Haplochromis is the type genus of free-roaming browsers sometimes call “haps” or “happies”. They live in more sandy areas and open waters, and are generally larger cichlids than their Mbuna “rock-dwelling” counterparts. They also are more peaceful cichlids and should not be housed with the highly active and aggressive Mbunas.

Like all the peacock cichlids they are very handsome and easy to breed. This makes them very desirable pets for aquarists of all experience levels. But being quite hardy and easy to care for makes them an especially good fish for the beginner.

Provide them with a good sized tank. A 55 gallon is the suggested minimum for one, but they will do best in 75 gallons or more when kept in a group. Have open space for swimming and a lot of caves where they can hide, sleep, or breed. A comfortable decor and regular water changes will make for a stress-free environment and healthy fish. These are some of the most carnivorous of the cichlids so they will enjoy a meaty diet. As they become comfortable with their home and routine, they can be almost puppy like and very excitable when being fed, thus adding to their appeal. 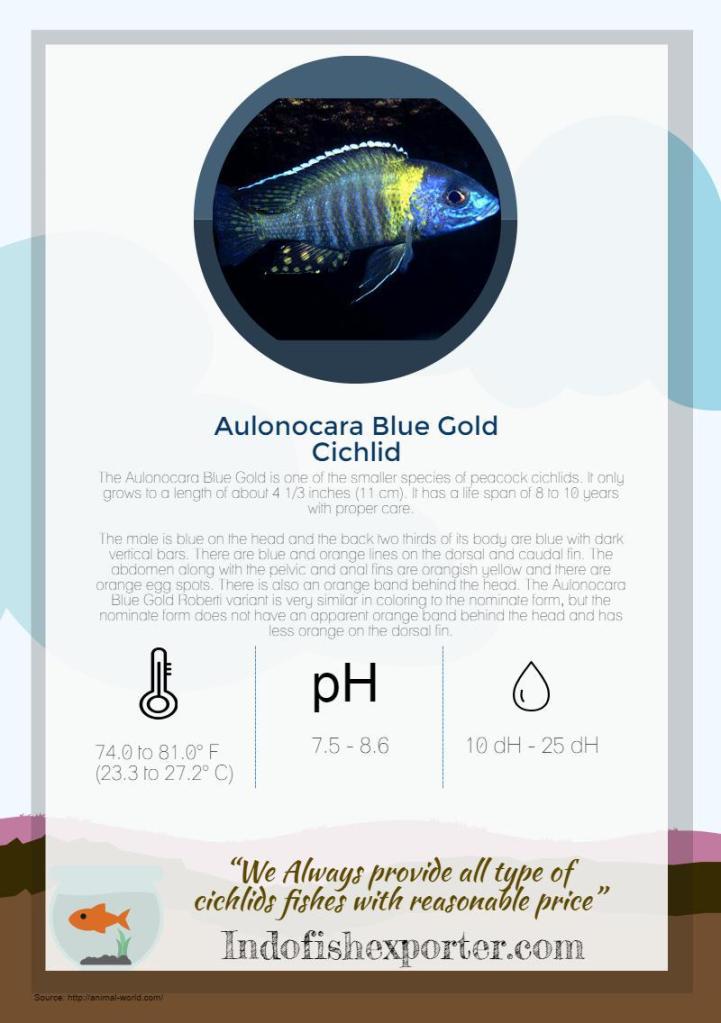