Send your inquiry of Pseudotropheus Ice Blue Cichlid (Maylandia greshakei) to our email :

The Pseudotropheus Ice Blue Maylandia greshakei, also known as William’s Mbuna, is a pretty zebra-type cichlid from Lake Malawi, Africa. It has a very appealing coloration of an ice blue body contrasted with a bright orange top fin. It makes a great fish to add variety in a Mbuna cichlid Tank.

This fish is zebra-type member of a group of cichlids called Mbunas. There are 13 genera full of very active and aggressive personalities of Mbuna cichlids. The name Mbuna comes from the Tonga people of Malawi and means “rockfish” or “rock-dwelling”. This name aptly describes the environment these fish live in as opposed to being open water swimmers like the Utaka cichlids and other “haps”.

This cichlid is also sometimes mistaken for its very close relative, the Pseudotropheus “Red Top Zebra Mbenji”, which is not yet scientifically described. These two fish have very similar physical and behavioral traits, however the Pseudotropheus Ice Blue has only been found in the southeastern arm of Lake Malawi near Makokola, while the other is from the Mbenji Islands.

The Pseudotropheus Ice Blue is only moderately aggressive compared to other Mbuna. It is not a community tank specimen to be kept with fish other than cichlids, but it can be kept in a tank with similarly tempered Mbunas. Do not house with fish of the same color and shape though, as the male will look at these others as trespassers and attack them.

For the aquarists who is willing to do frequent water changes and provide appropriate tank mates, the Pseudotropheus Ice Blue is easy to care for. It will quickly adapt to prepared foods and is readily bred if not kept with overly aggressive tank mates. To house one male and two to three females, a minimum sized tank of 48″ long with a lot of hiding places is needed for success. A much larger tank is needed for mixing Mbunas. 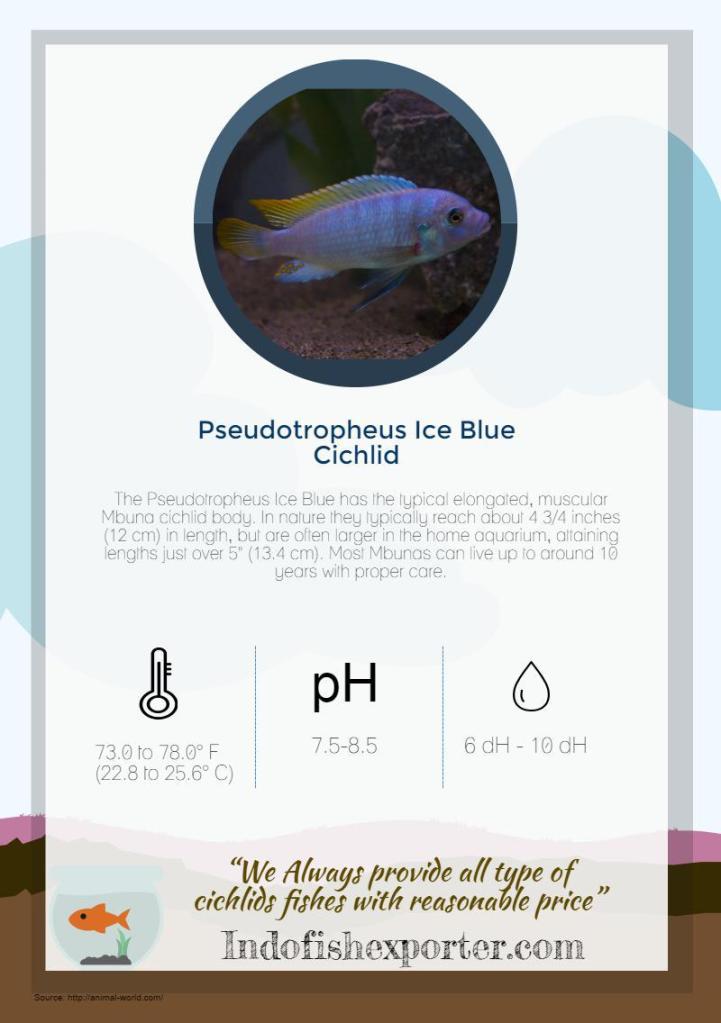