Send your inquiry of Lemon Cichlid (Neolamprologus leleupi) to our email :

The Lemon Cichlid Neolamprologus leleupi is a beautiful African cichlid from Lake Tanganyika with a fairly peaceful demeanor. It is a relatively small cichlid, with males reaching just shy of 4 inches (10 cm) and females being slightly smaller at just 3 1/2 inches (9 cm). With its personality and brilliant coloring it makes a beautiful addition to a mixed species aquarium.

Yellow colored fish are more of a rarity in freshwater aquariums, making this handsome cichlid highly sought after. This is perhaps the best known cichlid to have ever been exported from the lake. The first specimens were exported back in 1958, but it was quite rare and expensive until the 1970’s, when it began being bred in large numbers. Other common names it is known by are the Leleupi, Orange Leleupi Cichlid, Gold Cichlid, Gold Leleupi Cichlid, and Tanganyikan Lemon Cichlid.

This cichlid can vary wildly in its coloration, ranging from a bright yellow to a deep brown, depending on its place of origination within the lake. Consequently early on this species was thought to consist of 3 subspecies. The first, which is the nominate species, is N. leleupi leleupi, and it is the typical bright yellow fish. The second was darker in color and described as N. leleupi melas. The third was also a bright yellow but with a more elongated body, and was described as N. leleupi longior. This third fish is now recognized as its own species, Neolamprologus longior, and is commonly known as the Elongated Lemon Cichlid.

The dark morph is now recognized as just that, a dark color variety. The dark morph was found to have the same yellow pigment as the yellow morph, but it was obscured by black pigment. These cichlids have been carefully bred in captivity to selectively eliminated the dark pigmentation. There can still be a wide variation in color in the aquarium specimens, fluctuating from yellow to orange to red, but that is usually related more to diet and habitat. These captive bred specimens are often called descriptive names like Firecracker, Dutch Orange, and Super Bright Orange.

This is a great fish for both the intermediate and experienced cichlid keeper. It is hardy and not difficult to keep as long as it is fed live foods and as long as mandatory water changes are done (and difficult if they are neglected). Providing a diet of mysis shrimp and other live foods high in carotene will help promote the luminous yellow/orange coloring. A bottom of light colored fine sand will help keep their vibrant color. Yellow or orange fish should be kept over a light colored substrate or they will tend to turn dark. This can make them appear muddy or “dirty”. They also need plenty of hiding places and spawning sights with rocks, wood, flowerpots and ceramic caves. Plants are not essential but can be included. They will not harm the plants nor will they burrow.

In the wild the Lemon Cichlid is usually found alone and a pair will only come together for reproductive purposes. Though relatively peaceful, they can get aggressive with others of their own kind. They do best when kept singly or as a pair. A minimum sized aquarium of 20 gallons is suggested for a single fish or a pair. They are cave spawners, and a pair will readily breed. Young siblings from a spawning pair will usually get along okay, but others will not be tolerated.

These cichlids are inoffensive fish with other species, so can be kept in a community aquarium with other durable fishes as long as they have their own territory. To keep several, or to keep this fish in a community environment, the aquarium should be good sized with 40 gallons being a minimum but 75 gallons or more being preferable. 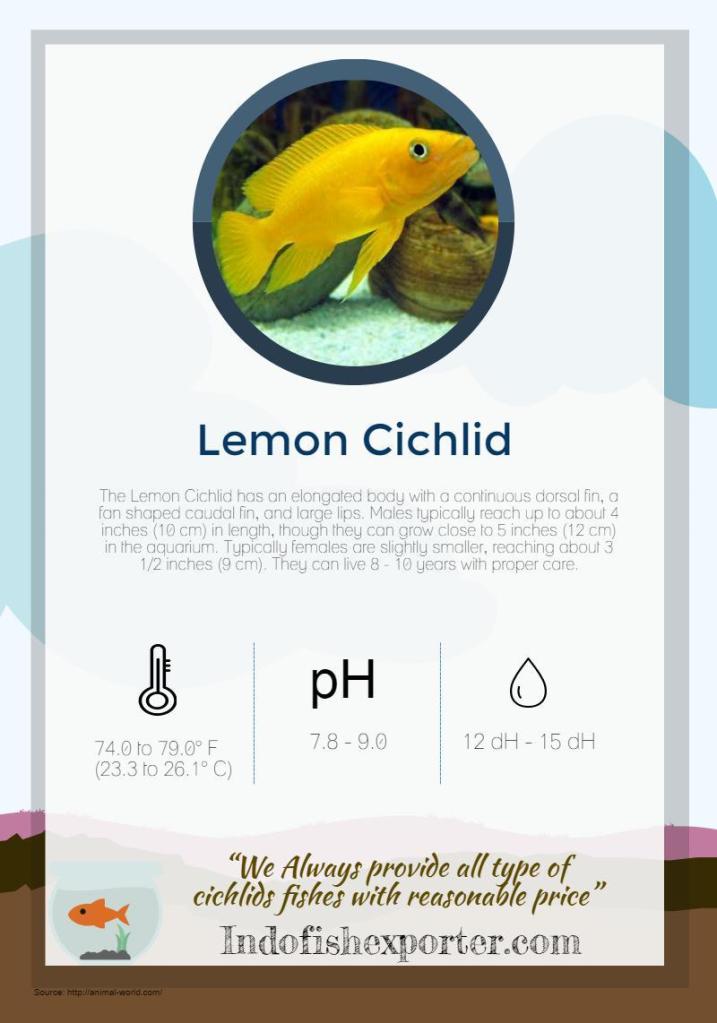