Send your inquiry of White Pearly Calvus Cichlid (Altolamprologus calvus) to our email :

The White Pearly Calvus Altolamprologus calvus (previously Lamprologus calvus) is unusual with its very laterally compressed body. This shape allows it to squeeze into the tight crevices and deep recesses within its rocky domain. There it hides and searches for prey. Its natural foods consists of small fish, fish fry, eggs and small aquatic invertebrates found deep in the rocky fissures. This fish can easily slip in and then simply “suck” these morsels into its large mouth.

It is found in the southwest regions of Lake Tanganyika, Africa but there are a number of geographic variants. These each have very interesting colors depending on its location. Some may eventually prove to be distinct species or a subspecies. The body colors will vary between a black to a light whitish gray,and be with or without a yellow cast. There is a dark vertical striping that is most apparent in the front part of the body, and bright spots starting at about the pelvic fins going back onto the tail. Color patterns of the varieties can range from being black with white and light blue accents, to white with dark brown accents. There are reportedly “orange” and “tiger” varieties too, but these are most likely crosses.

This cichlid has a scaleless area on its forehead right between the eyes. Hence its species name “calvus” means “bald” in latin. Common names it is known by include Calvus Cichlid, Pearly Compressiceps, Pearly Lamprologus, and Pearly Calvus. This scaleless area on its forehead feature along with its colors and locality have led to a number of descriptive common names as well such as Black Calvus, White Calvus, White Chaitika, Tanganyika Blackfin, Congo Blackfin, Yellow Calvus, and Black Pearl Calvus to name a few.

It is closely related to its very similar looking relative, the Compressed Cichlid Altolamprologus compressiceps. Both of these species are compressed laterally, and although they look much the same there are several differences. The Calvus has a longer, shallower body giving it a more streamlined appearance. The Compressiceps is thicker in body width with a higher back, and it has a sloping forehead with a blunt upturned snout. The color the Calvus is brightly spotted with less distinct vertical barring while the Compressiceps has a bold stripes with very subdued, indistinct spots. The Calvus is somewhat smaller, attaining a length of about 5 – 6 inches in length, while the Compressiceps can reach up to 6 – 7 inches.

This is a good fish for both the intermediate and experienced cichlid keeper. It is moderately easy to care for as long as regular water changes are done to keep the water quality optimal. An aquarium best suited to this fish would be a minimum 40-50 gallons with a sandy bottom or very fine gravel substrate, and lots of rock formations for hiding places. Though plants are not essential, they do not burrow and will not harm them.

Being of a more peaceful disposition than a lot of cichlids, they are great for a peaceful Lake Tanganyika community environment. They mostly just mind their own business. They can be kept in pairs or in groups and are generally peaceful toward those of the same species. However if kept in a very large tank, they will establish a territory and chase conspecifics out. They will tolerate peaceful cichlids of a different genus. 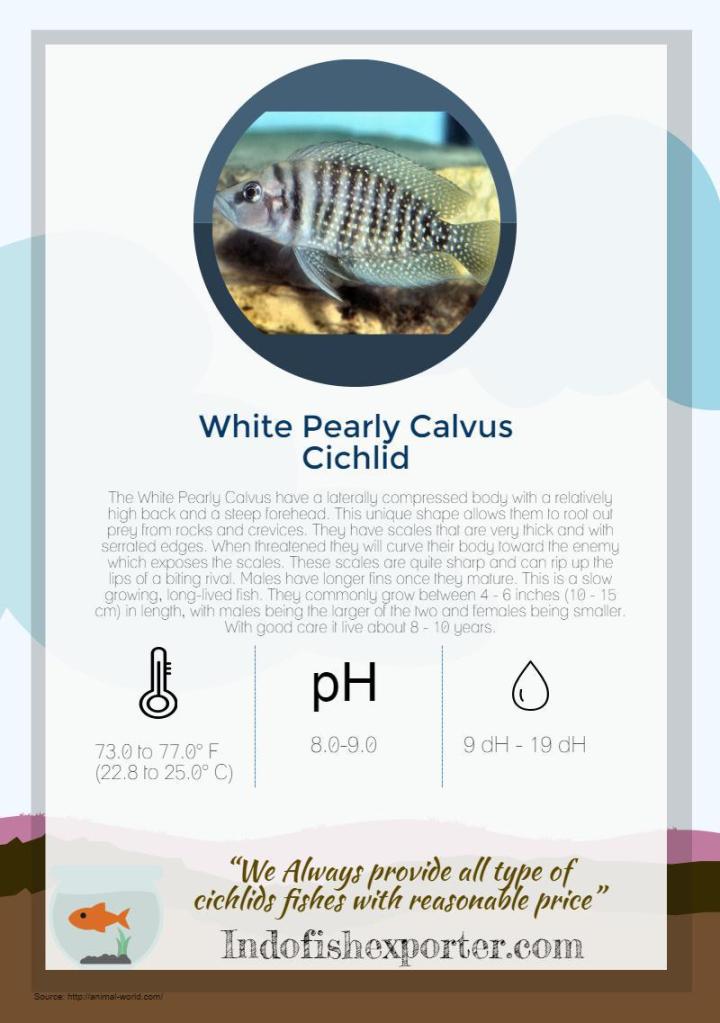